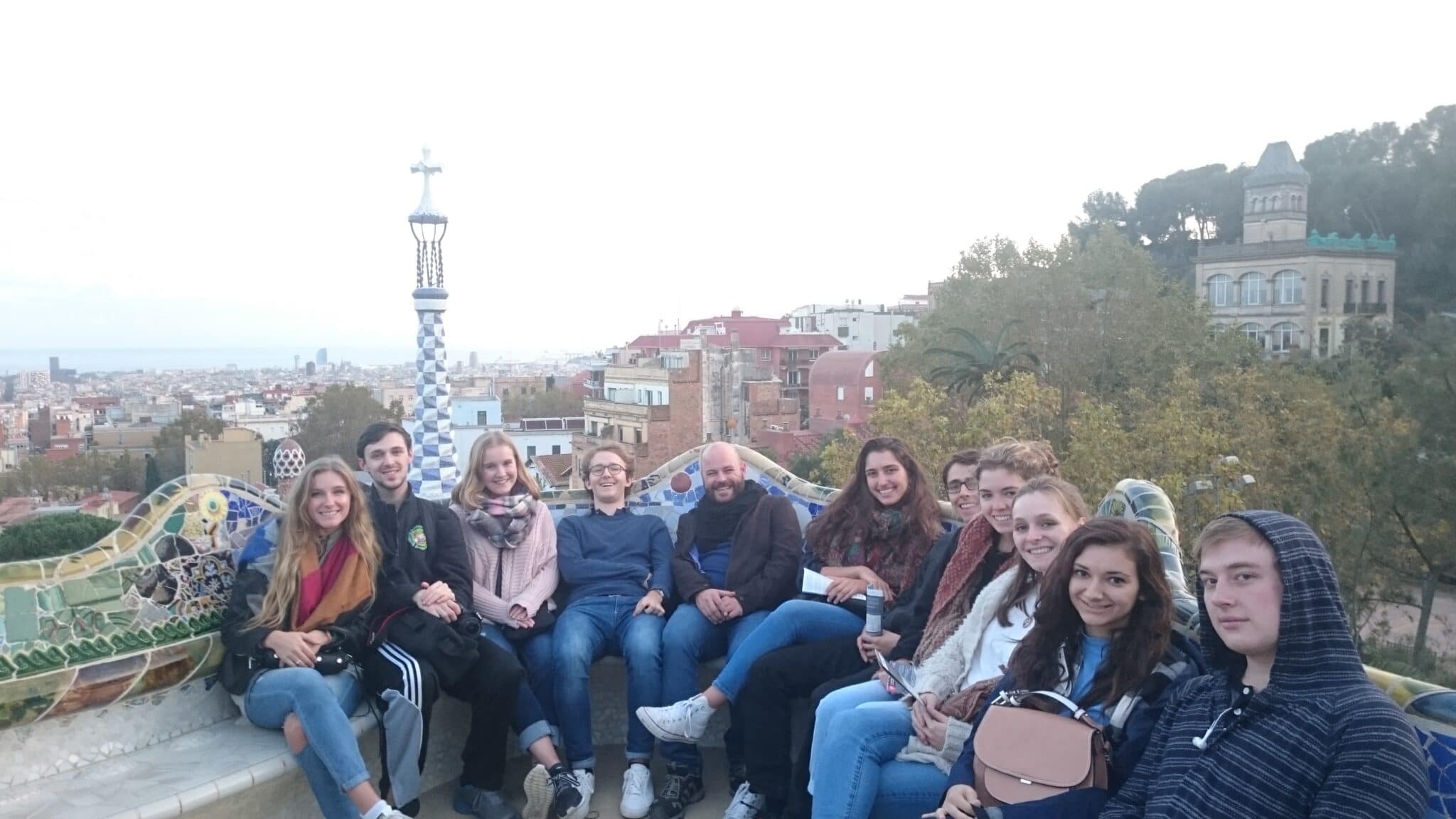 Once more unto the breach dear friends once more; with another adventure comes another early morning, but at this point our now travel-hardened college students laugh in the face of 6 am starts, their once formidable adversary.  Well… at the very least, only one person forgot their passport at home this time.

This time, however, due to Barcelona´s geographical distance it was necessary to travel by plane, thus we were whisked by private transfer to Seville´s very own airport. We were very lucky as we had a smooth 1 hour flight and had clear blue skies all the way to our destination. 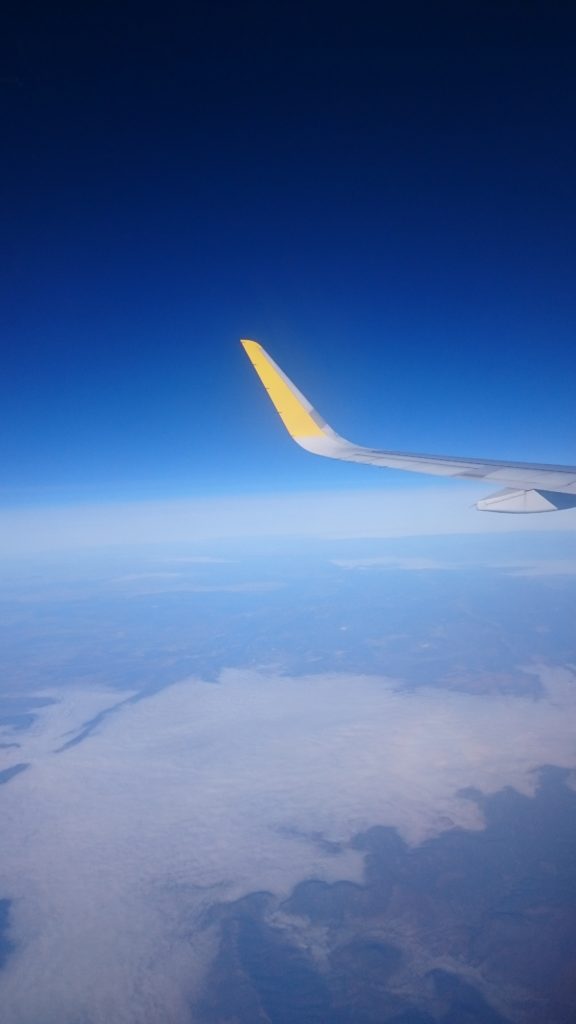 Clear skies during our flight

Upon arriving in Barcelona it almost felt like we were in another country; we immediately noticed that all signs were adorned with three languages: Catalan, English and Castilian (Spanish), in that order. Perhaps this has slight political undertones and is a way in which locals seek to distinguish themselves from the rest of Spain through linguistic means, as they strive for independence. Surprisingly such a sentiment resonated throughout the rest of the city. Almost each apartment block had at least one separatist flag flying from one of its windows.

We arrived at our hostel, which in reality was more like a hotel. We were divided into rooms of two or three people, each with its own bathroom, shower room and flat screen TV. It even used fingerprint scanners as the means to gain access to your room. How very sophisticated.

Our first port of call was “las ramblas” the famous high street in Barcelona, shortly followed by a visit to quite possibly the most incredible market I have ever seen. Not only did it sell a wide variety of high quality produce, but it was also aesthetic and well organized. The stalls were bursting with bright colours and aromas, which added to the already electric atmosphere. 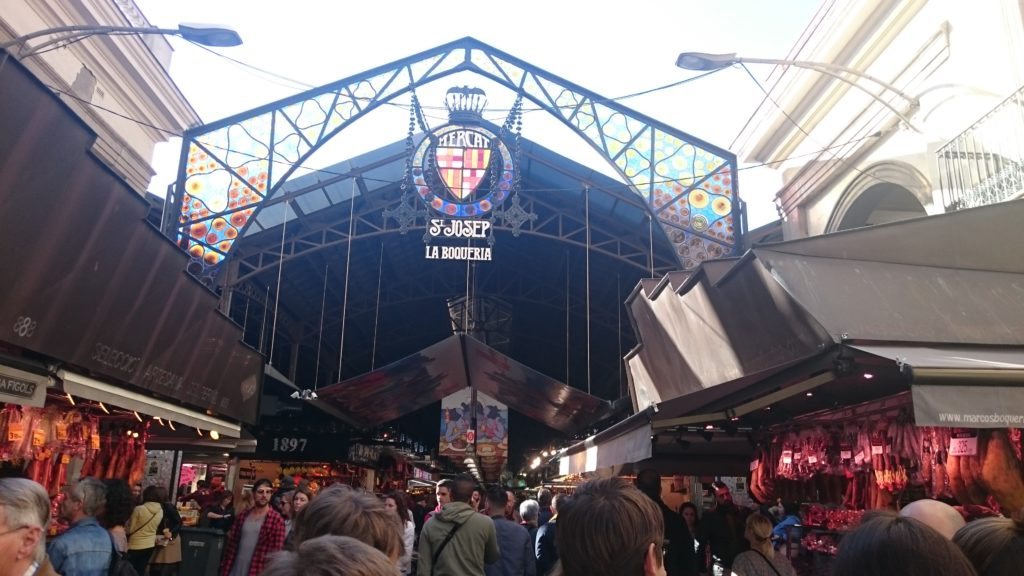 The market next to ´Las Ramblas´

Following this it was time to fill our already depleted stores of energy with food from an all you can eat buffet, before meandering through the old city streets and getting a general feel for the city. My favourite part was the visit to the church, Santa María del Mar, where the incorporation of contemporary sculptures and art into the gothic aesthetic was so unique and different from anything I had ever seen before. It even had a stain glass window with a small separatist flag printed discreetly upon it.  Although it is somewhat controversial to mix political messages with religion, I felt this was a true reflection of the Catalan spirit and an example of how this incredible landmark was oozing with local character.

Our sight-seeing for the day was over, and our students dragged their sleepy heads back to the hostel after a long day of culturally immersing themselves into another aspect of the Spanish culture.  They were given the freedom to go and choose a local venue to have dinner; many decided upon a vegan restaurant whilst others chose to sample some Barcelona tapas.

The following day was branded the Gaudi day, the whole itinerary was centered around the late architects fascinating, realist masterpieces. Our first port of call was la pedrera a set of apartments with forged iron balconies and sculptures of Greek gladiatorial masks incorporated into the chimneys on the roof. Everything about this building had an air of the eccentric, from the use of broken champagne bottles as building material, down to the curvy arches that separated rooms. Gaudi´s active decision to separate himself from architectural norms is what makes him such an iconic symbol. 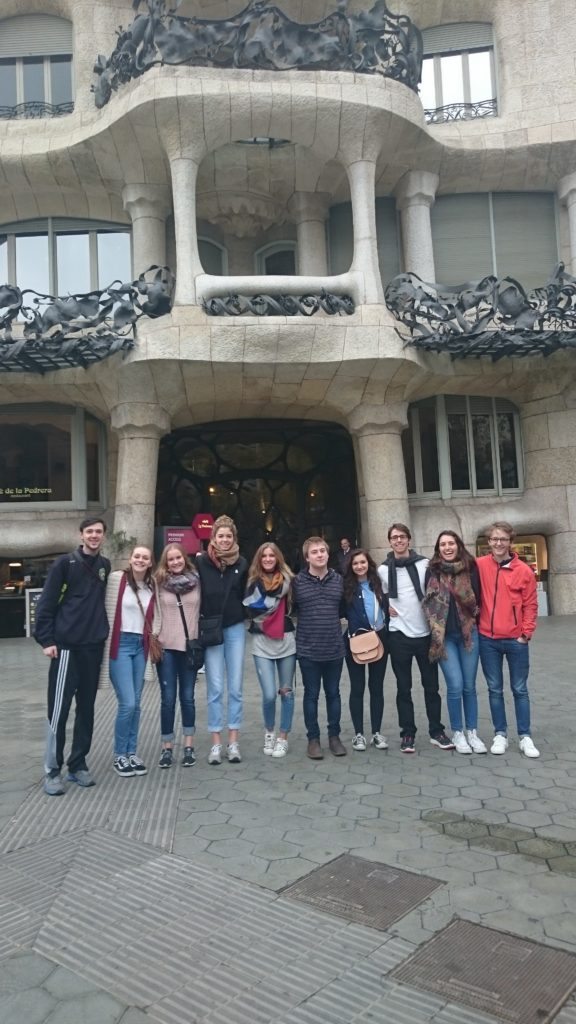 Our students in front of La pedrera

We then took a short metro trip and were greeted by the beautiful image of the Sagrada Familia upon emerging from the underground.  Having been consecrated in 2010 by Pope Benedict XVI it is now considered a Basilica rather than a church; thus it now has a spiritual as well as an aesthetic importance. This incredible Barcelona landmark attracts over 3 million people per year, and the profits of this contribute to the $25 million annual construction fees.

It is impossible to overstate the beauty of this incredible landmark, especially as construction started over 130 years ago, and it is yet to be completed. Just about every aspect of its architecture has a symbolic meaning, from the towers to the interior which all reflect another dimension of Gaudi´s realist philosophy. He liked using nature in his masterpieces, and this can certainly be seen with Sagrada Familia: the doors are covered with wooden leaves and insects, whilst inside there are many forest-like features.  The beams look like trees, whilst the stain-glass windows create a rainbow that shines upon the walls. It is a truly magical building. 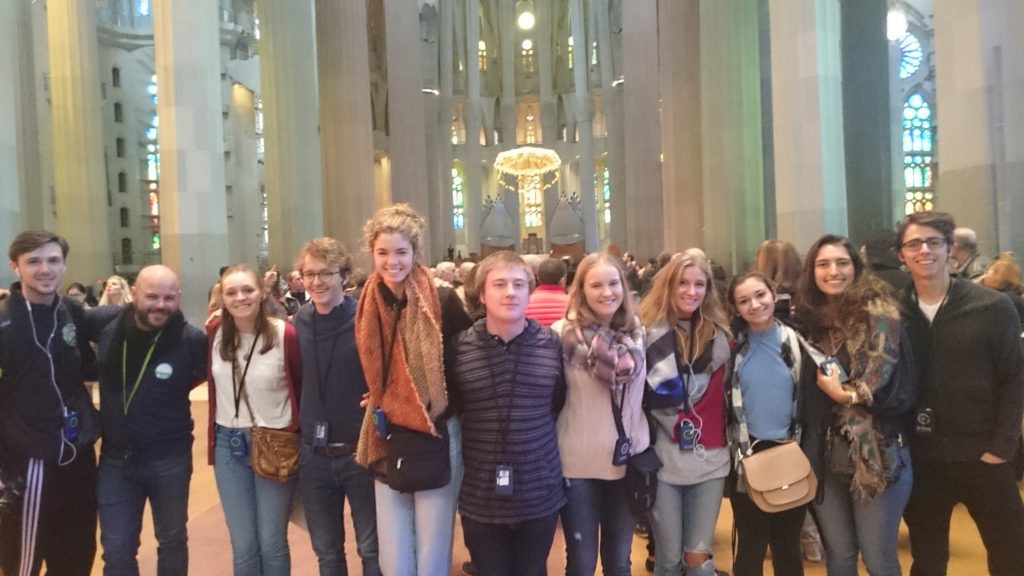 Our students in Sagrada Familia

Finally, we visited park Guëll, one of the main landmarks in Barcelona. As it is located on top of a hill it offered some incredible panoramas of the city. Without intending to fulfill any stereotypes I did use this opportunity to stick my headphones in and listen to Barcelona by George Ezra whilst soaking in the view. I know… such a tourist. In all seriousness, it was breathtaking. Being on a hill in a natural environment you felt completely removed from the city, and it was a special feeling to see the beating heart of a city, and life for many people, sitting so peacefully right in front of you. 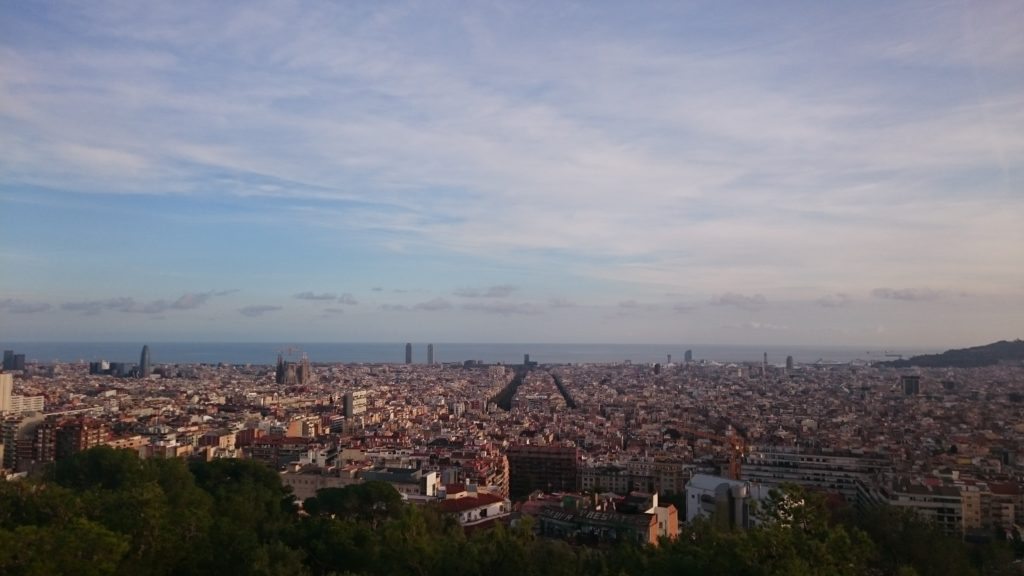 The incredible panoramas of the city from Park Güell

That evening we were given the opportunity to eat-out and explore the city at night-time; it was interesting to see how this already vibrant city came to life in a different way during once the sun had set. They call it the city that never sleeps and it is easy to see why.

The following day our William & Mary and CNU students had the freedom to do whatever suited them best.  Some decided to go to the Picasso museum which holds many of his famous exhibits such as Man in a Beret, or The Mountain Landscape.  Another group of football (or soccer) enthused students decided to visit the famous Camp Nou, home to the world class Barcelona FC football team. Whilst one of our students visited the chocolate museum, which is full of famous sculptures made out of chocolate! Would you believe it! Personally I´d be too frustrated at not being able to eat any of the exhibits, but I can certainly appreciate that this is an art form in itself. 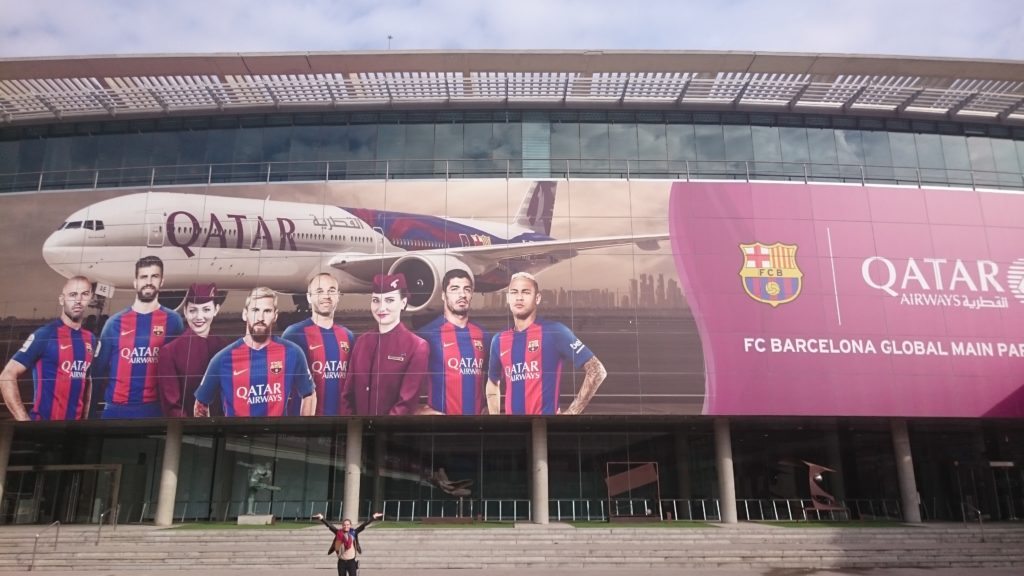 Following this all that was left was to make our way to the airport and catch a flight back to Seville.

All-in-all Barcelona was a great opportunity for our American study abroad students to experience a far more Europeanised Spanish city, which offered a different culture and lifestyle to what they had grown used to living in Andalusia. I know many of them will not hesitate to return.