This week our study-abroad college students continued their cultural immersion by learning how to make an iconic, gastronomical Spanish dish: the paella.

Paella is a perfect example of how the various cultures have meshed together in Spain; a topic I have alluded to in previous blog posts, particularly in reference to the architecture in Seville. The name actually refers to the dish it is cooked in, and it lends its roots to the Latin word ´patella´ which translates to pan. The rice, on the other hand, is a reflection of the Moorish occupation, as the Muslims imported this ingredient and began its cultivation in Spain. In fact, some believe the name itself stems from the Arabic word ´Baqiyah´ which literally means leftovers, as Moorish servants would use the leftovers of meals and put them all into the paella. 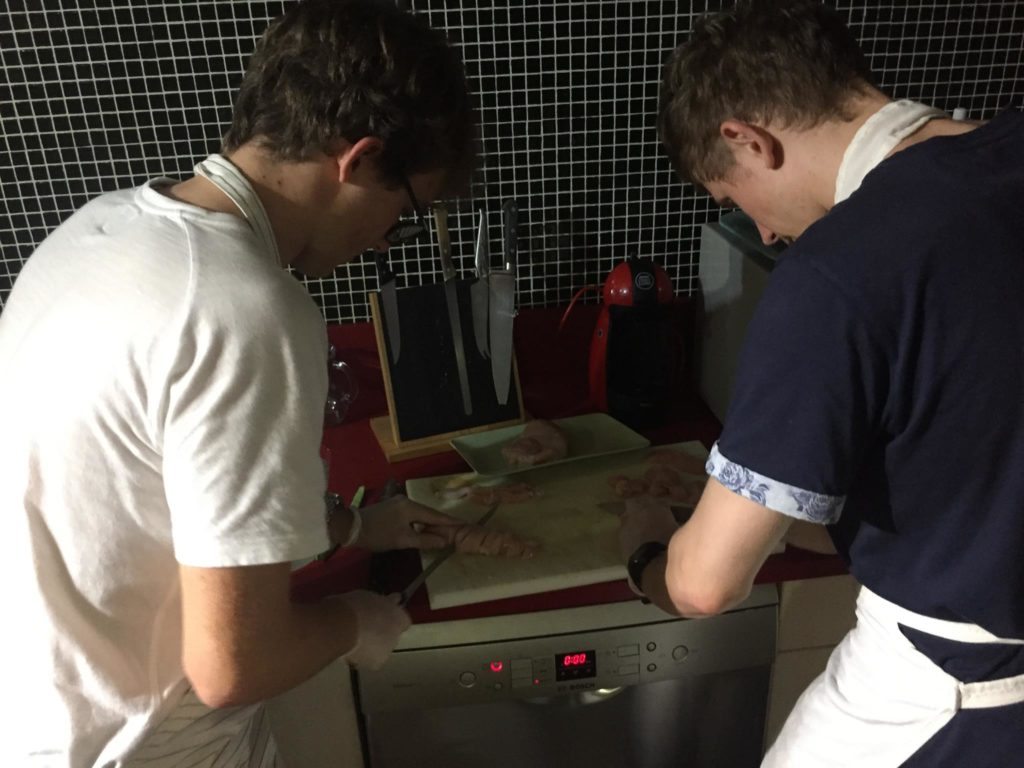 Meticulous preparation of the chicken

Anyway back to our students from William and Mary and CNU. The workshop was held in a modern New-York styled apartment with a wide open kitchen designed to hold cooking lessons for big groups of people; there was a large paella dish above a gas stove, conveniently situated right in the middle to provide easy access for everyone. We were greeted by our two hosts, who also happened to be Spanish gastronomical experts, who told us fairly frankly that the cooking will be left almost exclusively to the students themselves. So the quality of our dinner was entirely upon our shoulders, no pressure… This was no obstacle for our fearless American college students, as they nonchalantly rolled up their sleeves and got to work. 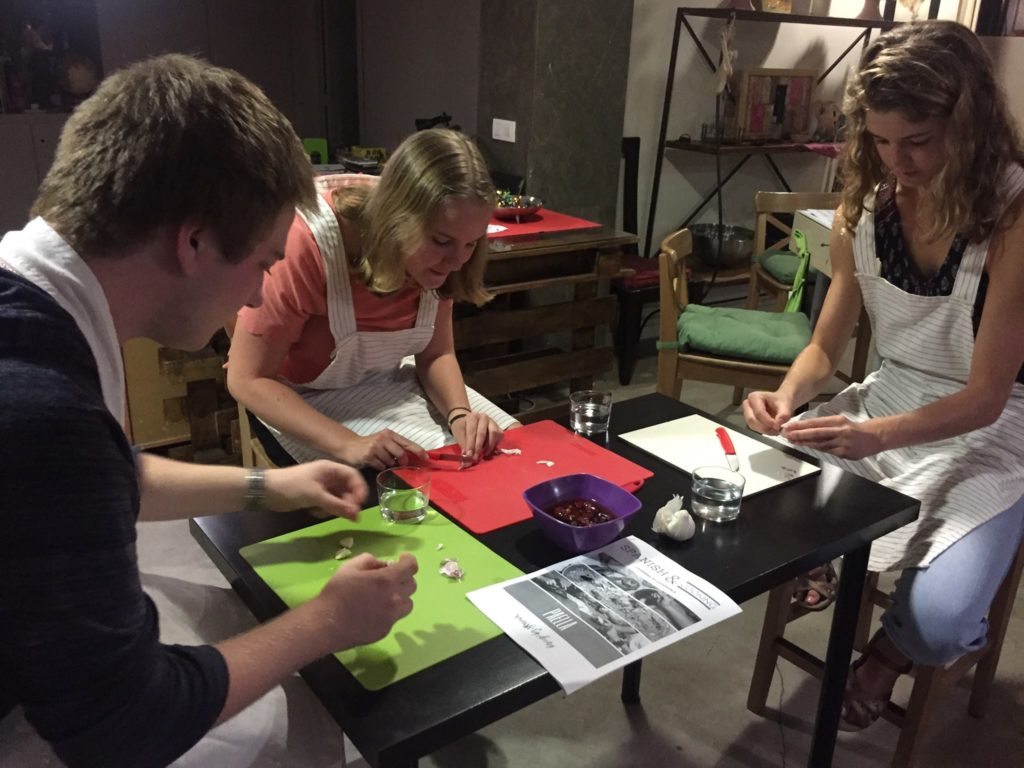 Preparing the herbs and spices

We were divided into groups which were each assigned specific tasks. Some were in charge of cutting the vegetables, others, the meat, whilst the last group was in charge of preparing the sauce.

The rest was fairly straightforward, it was all a matter of frying the meat and vegetables, and then adding chicken stock, water and rice to allow all the ingredients to boil together softening the vegetables and causing the meat to release its flavors into the rice. 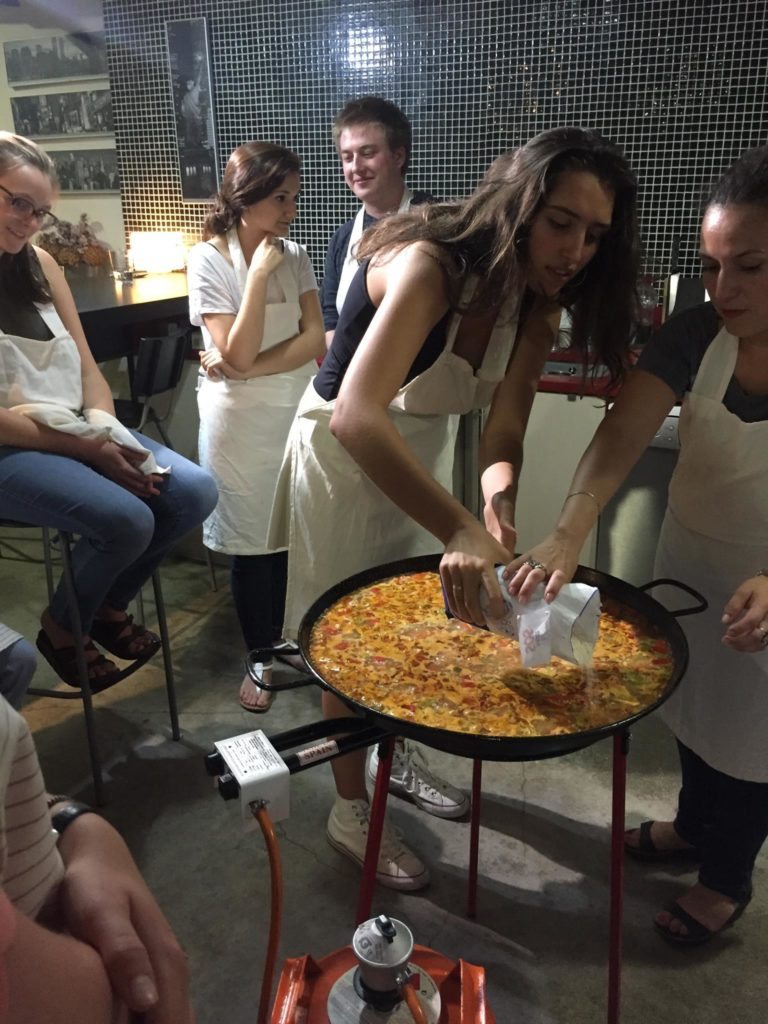 Pouring the rice into the paella.

With paella you boil the dish on a medium heat for 12 or so minutes, before putting it on a high heat for the last five minutes to ensure that the rice at the bottom becomes harder, giving it more texture. During our wait, our hosts taught us some food-related, Spanish colloquialisms to help with our language learning. For example ser un chorizo (lit. to be a sausage) refers to an individual who steals; Spanish people often use this expression when referring to politicians. Whilst ser pan comido (lit. bread that has been eaten) is used when you want to say that something is very easy.

In the meantime our paella was coming on nicely, and after smelling the incredible aromas the dish gave off, whilst it was cooking, we were very hungry. It was to our frustration and impatience to hear that after letting it boil you let the paella stand for ten minutes or so to allow the flavors to be sealed in.

Finally it was ready, and we were given a  slice of bread to go with this traditional Spanish meal. Lo-and-behold the paella was incredible, hats-off to our college students, not bad for a first attempt. What a fun way to learn about the Spanish cuisine. 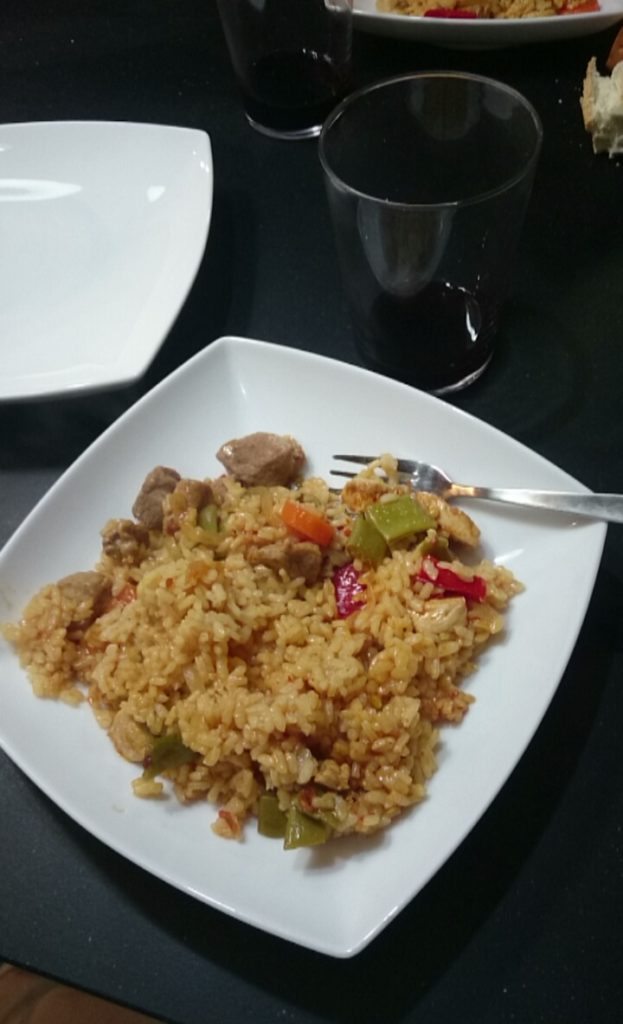